Fuel prices closely track those of crude oil because crude oil is the largest input cost. EIA anticipates stable prices over the next two years 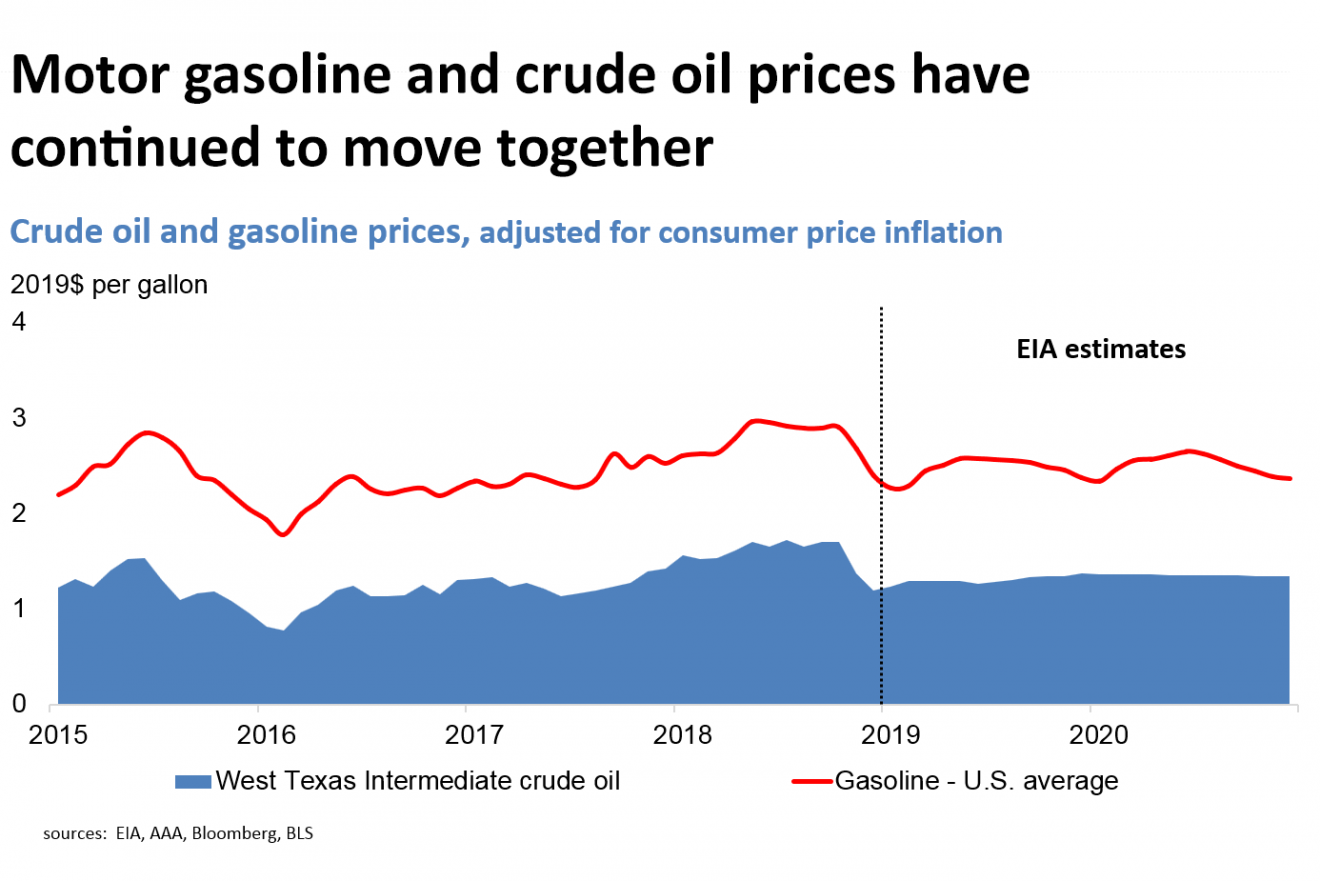 With solid economic growth, U.S. petroleum demand (20.5 million barrels per day in 2018) ran at its highest level since 2007 and was up by more than 500 thousand barrels per day from 2017. Gasoline prices ($2.34 per gallon nationwide average in January 2019 per AAA) have decreased recently in tandem with oil prices to their lowest levels since 2017.

The biggest single component of retail gasoline prices is the cost of the raw material used to produce the gasoline – crude oil. Recently, that price has ranged between $50 and $70 per barrel, depending on the type of crude oil purchased. With crude oil at these prices, a standard 42 gallon barrel translates to $1.19 to $1.67 per gallon at the pump. Excise taxes add another 49 cents a gallon on average nationwide.

There are additional costs to refine, transport, and sell gasoline at retail outlets. As of January 2019, crude oil costs accounted for 53 percent of what people are paying at the pump per the U.S. Energy Information Administration. Excise taxes averaged another 21 percent. That leaves just 26 percent for the refiners, distributors, and retailers.

The remaining 26 percent of the price is the cost to refine, transport and sell gasoline. If that seems rich, consider that in Q4 2018 the natural gas and oil industry as a whole earned net income of just 5.8 cents per dollar of sales. For manufacturing industries in general, the average over the past decade was under 8 cents per dollar of sales, so natural gas and oil have lagged other industries with low oil and natural gas prices brought by the U.S. energy revolution.

What are the main components of the retail price of gasoline?

The cost of crude oil

Distribution and marketing costs, plus a reasonable profit margin

What determines the cost of crude oil?

The cost of crude oil is the largest factor in the retail price of gasoline. The cost of crude oil as a share of the retail gasoline price varies over time and across regions of the country. U.S crude oil prices are determined by global fundamentals, including supply and demand, inventories, seasonality, financial market considerations and expectations.

Taxes add to the price of gasoline

Federal, state, and local government taxes also contribute to the retail price of gasoline. The federal excise tax is 18.30¢ per gallon, and the federal Leaking Underground Storage Tank fee is 0.1¢ per gallon. As of January 1, 2019, state taxes and fees on gasoline averaged 28.31¢ per gallon. Sales taxes along with taxes applied by local and municipal governments also can have a significant impact on gasoline prices in some locations.

Refining costs and profits vary seasonally and by region of the United States, partly because of the different gasoline formulations required to reduce air pollution in different parts of the country. The characteristics of the gasoline produced depend on the type of crude oil that is used and the types of processing technologies available at the refinery where it is produced. Gasoline prices are also affected by the cost of other ingredients that may be blended into the gasoline, such as ethanol. Increased demand for gasoline in the summer generally results in higher prices.

Distribution, marketing, and retail dealer costs and profits are also included in the retail price of gasoline. Most gasoline is shipped from refineries by pipeline to terminals near consuming areas, where it may be blended with other products (such as ethanol) to meet local government and market specifications. Gasoline is delivered by tanker truck to individual gasoline stations.

Some retail outlets are owned and operated by refiners, while others are independent businesses that purchase gasoline from refiners and marketers for resale to the public. The price at the pump also reflects local market conditions and factors, such as the desirability of the location and the marketing strategy of the owner.

The cost of doing business by individual dealers can vary greatly depending on where the dealer is located. These costs include wages and salaries, benefits, equipment, lease or rent payments, insurance, overhead, and state and local fees. Even retail stations next to each other can have different traffic patterns, rent, and sources of supply that affect their prices. The number and location of local competitors can also affect price.