Are We Looking at a Dead Cat Bounce in Oil

Oil bulls look to have arrested the slide as there hasnt been a down day since Thursday. One could easily expect a more vigorous rebound however. The nearby resistances remain and black gold has hardly gone anywhere today so far. After the long weekend will the bulls muster more strength or does the technical picture favor another trip south in the coming days The answer isnt as easy as might be inferred from the Alerts title... 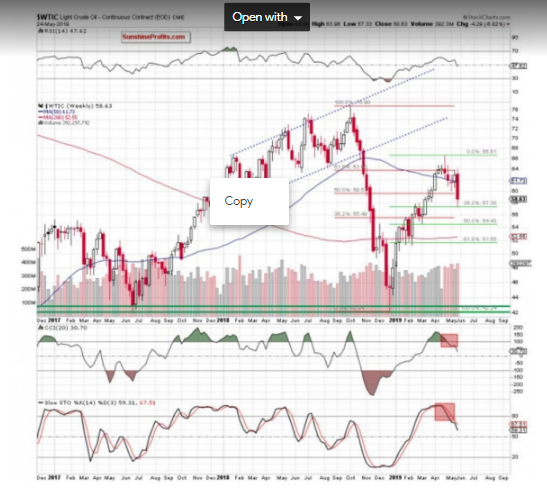 The daily perspective shows crude oil having moved a bit higher after Thursdays landslide. The upswing

blue trend channel and the dashed green support line (based on late-March lows).

Although this is a positive event for the bulls, we should keep in mind that they havent reached even the

38.2% Fibonacci retracement (based on the last weeks decline). This increases the likelihood of seeing

another downswing in the coming days. Especially so, when we factor in the weekly picture of the

commodity and the similarity to the recent past. Lets quote our Fridays Alert:

() Crude oil has created a similar gap in November 2018 thats not too far from yesterdays gap. Back

then, oil bears also created a long red candlestick on very high volume (its marked with a blue vertical

line). There was an attempt to repair the damage in the following days but the bulls efforts failed after a

Will the history repeat itself? Its quite likely. Theres also one more thing speaking for the bears today

back then, the Stochastic Oscillator supported the buyers, now it visibly favors the sellers.

How low could the oil price go next? Lets remember once more our Fridays Alert:

() If the commodity extends losses from here, we could see a drop even to around $53.50, where the

size of the decline corresponds to the height of the channel.

But the first target for the sellers will be a bit higher at around $54.70, where the size of the downward

move equals the height of the rising red wedge (as marked with yellow rectangles).

This is the area marked by the 50% Fibonacci retracement, the late-February and early-March lows. They

together create the green zone serving as the next important support for the bulls.

Summing up, the outlook for oil is bearish. After the Wednesday and Thursdays sessions that have

shaken the oil market, the bulls have been unable to engineer a fast price recovery. Black gold is still

trading beneath important short-term resistances, its rebound from the lower border of the declining

continue to support lower prices and the picture concurs. The short position continues to be justified